Opinions in posts on this blog are subject to change...

...and may not reflect the current understanding of your wee abbess! Posts older than 90 days may have bits and pieces which have been updated as I learn and grow. If you have questions, please do ask! See the "Contact Abi" button below.

This site uses cookies from Google to deliver its services and analyze traffic. Your IP address and user-agent are shared with Google along with performance and security metrics to ensure quality of service, generate usage statistics, and to detect and address abuse.

9/12/18 Revised definition of cHesed: Purposeful favor, perpetually initiated, with deliberate affection. The distilled version of Perichoretic cHesed and what it can look like lived out. I have replaced the old "org chart" with this PDF that more closely reflects my current understanding.

AbiSomeone
Instigator at Missional Tribe ... Triadial Abbess of The Purple Martyrdom from The Abbey ... watching for CovenantClusters to be revealed ... engulfed in Perichoretic cHesed!


Quality time is priceless.
Words are for encouragement.
Actions need to serve others.
Physical touch is essential.
Gifts are given and received.

...freely you have received; freely give.

In the New Testament, a martyr was a witness to the work of God in Jesus -- the Gospel. Not all martyrs' witness resulted in their death (as current usage of the word would suggest).

So, just what is the Purple Martyrdom? It is daily embracing the brokenness in our lives as a means to bear witness to the faithfulness of God's love and care -- his cHesed -- in the midst of our circumstances. Follow this link to learn more.

Enough organization for relationships to thrive. Enough chaos for creativity and communitas to emerge. Every need met.

Abi's view is purple...click the image to find out why.


LORD, in all that I see, think, do, and say, let my inspiration come from your Holy Spirit rather than from human perspectives and desires;

LORD, let me perceive people and situations as you perceive them;

LORD, let me engage in as wide and deep and diverse a discipline of studying, thinking and discussion (especially listening) as I am able; and

LORD, let me act enough like Christ in every circumstance that my feeble light will be magnified by your cHesed and shine forth in the darkness I encounter around me.

Updated update!  The last stragglers have been added to the list.  I hope you wander through these thoughtful posts...take your time, they're not going anywhere!  ;^)

Update!  The list of the other participants in this Synchroblog are listed at the bottom of the post....

It is always a miracle when I am able to participate in the Synchroblogs of my friends ... and when I first read the topic on this one, I was filled with turmoil.  You see, there is entirely too much division in my house...and the bridge that used to unite us was effectively blown up five years ago. I have been pretty much in survival mode since then.

Some bridges cannot be unilaterally built -- they require cooperation between those who possess the land on either side of the gulf that divides.  And so I wondered if I would have anything to say this month...that I was willing to say in public, that is.

But today I find that I have a few things to say!

The house that Jesus was talking about is the house of the Triune God, where Father, Jesus and Grandmother dwell in Perichoretic cHesed. Where there is such unity and togetherness that there is no other word to describe their reality other than that they are One. Interesting that the last Synchroblog in which I was able to participate was on that topic...kind of like a warm up to this one, eh?

Take a look at the entire story in Mark 3...see that the context is about whether Jesus is of God's house and just who make up the members of that household.

This little story tells two important things:  the Household of the Trinity cannot be divided...but the neighborhoods in the Kingdom sure can be.  This gives me a firm foundation as well as a firm reprimand. If Jesus gave no special place to his flesh and blood family, I should consider my priorities carefully too....

When I get all caught up in the distinctives of various neighborhoods, it is all too easy to forget the distinctives of the Kingdom.  Kingdom reality carries the proper pH -- not too acid nor too alkaline -- that sweet spot described by the number seven:  complete, whole and full -- where human life flourishes and homeostasis is possible:  Just Right!

When Jesus became human, it was a distinctive he would carry for the rest of Eternity.  And in that blend of Trinity and Humanity he took hold of all of creation. He became the first truly fully human; one who was not divided by the knowledge of good and evil, but united with Father and Grandmother as he hammered out what it meant to be fully human and fully God. He laid hold on his creation and took us down with him in death, where he entered fully into our fallen darkness and blindness. He put to death fallen humanity and voided Adam's sin. He fell with us into our hell ... and turned on the lights! When he rose from the grave, he bought all of creation back to life -- recreated!  In Christ there is no gap left to bridge. We have been included in the Perichoretic cHesed of the Trinity because we are IN Jesus. All humanity has been adopted through the New Covenant in Jesus.

The challenge he sent Grandmother to work out, when he returned to Father, was the education of the newly adopted children. This is no small challenge:  most of the children have not heard about (or do not believe) what Jesus has done for them: They have nothing to earn. They have only to see and hear, believe and receive, repent and reorient to Kingdom life.

And that is where we come back to division. Or should we say poor vision? In and out. Us and them. Included and excluded. Jew and Greek, slave and free, male and female. What a big gulf is represented by that little word: division.

The problems of division come when we look at our lives through our own eyes, rather than through the eyes of Jesus, as revealed by our Holy Grandmother.  We need new glasses for this new reality -- for our eyes will not be healed until that day when our bodied are transformed into ones like Jesus. Until then, we all need glasses. I call them cHesed Glasses....

One of the reasons why I have had to step away from institutional forms of Christianity is kind of like keeping 3D glasses on after you leave the 3D environment. Thinks just don't look right. Images look blurred and flat instead of crisp and bold. I have talked about the 3D quality of my cHesed Glasses, but there is an update needed.  I guess they need to be called 3D Perichoretic cHesed Glasses! ;^)

These 3D pH Glasses are kind of like those glasses said to have been made by Benjamin Franklin for reading the secret map on the back of the Declaration of Independence in the movie National Treasure, staring Nicholas Cage. Depending on which lens combination was being used, different things on the map could be seen.... 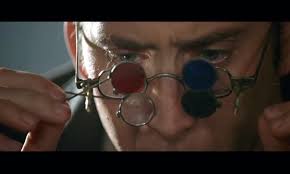 3D pH Glasses see through the lenses of love, grace and mercy. They show us not only how God's love, grace and mercy are poured out over us at all times...they also show us opportunities for us to share this gracious loving-kindness with all of Creation -- humans, animals, plants, planet.

I have come to see that the glasses that Western Christianity has ground out for us to wear have a prescription that looks more to Plato and Greco-Roman legal constructs (which influenced Augustine, and through him, Luther and Calvin and so many others) than toward Moses and cHesed as covenant relationships. I have become more and more convinced that this is one of the biggest sources of division within the neighborhoods of the Kingdom.

It seems to me that all divisions come, um, from vision problems. I love how Baxter Kruger says that theology is basically just Windex to clean away the dirt and smudges that mar our ability to properly perceive God as they exist as Father, Son and Grandmother. We need to remember to not only wear our 3D pH Glasses, but to regularly clean them with Trinitarian Windex!  That Platonic Windex just doesn't work.

When I am looking out through glasses that are ground to help me see the amazing relationship between Father, Son and Grandmother -- where there is no competition or hierarchy, but only the freedom of Perichoretic cHesed for one another and for me -- it is such a fresh and beautiful sight. But when I look at structures of law and judgment, expectation and responsibility, organization and hierarchy, power and control that so many churches have adopted...well no wonder it gives me a headache!  And when our Platonic Windex only smears without cleaning, we multiply the problems.

In the end I have to keep reminding myself the division in the Kingdom is not really Real. It's just a bad case of distortion -- one that requires new glasses and proper Trinitarian Windex!  That being said, poor vision is the cause of many an injury...and neighborhood divisions in the Kingdom are the most tragic form of "friendly fire" that exists!

May Jesus help us find ways to replace division with his vision....


Here’s the list of other bloggers contributing posts related to healing the divides this month:
Posted by AbiSomeone at 3:11 PM

You are wise and I'm better because you are willing to share your wisdom!

You are kind and I'm better because of your encouragement! :^)